We survived another year of Southeast shenanigans, and one of the most challenging Regionals setups yet, including the painful round robin pool play format. It is a shame some of the Region’s other talent was not able to be on display, whether it was because their team had to drop or because they had other commitments that forced them to one or no days of play, or because the Sunday conditions were such a mess.

All caveats aside, here are the seven best performers I saw this past week, making up Southeast Women’s Regionals 7 Stars Line, presented by Full Field Hammer:

Emily Lloyd (Georgia): With all due respect to Mariel Hammond, Lloyd is the best cutter in the Southeast region. This was on display throughout the weekend, as she was able to use her initial bursts and smart timing to open up the deep lanes for the Dawgs. On the other side of the disc, she and Julia Fuster typically take the opponent’s top cutter, or top two if they are both on, meaning Emily has a lot demanded of her by her team. She was the premier playmaker I saw this weekend, whether it was in the air, coming under, and laying out for jaw dropping plays, like her performance against UCF.

Sunny Harris (Central Florida): I’ve exhausted enough keystrokes on Sunny’s passion and fire, but her play was speaking very loudly this weekend. Her huck game was on point, forcing teams to find a way to get someone in front of her and her receiver after a turn. She made some big grabs and got up for some big Ds, particularly in the Sirens vaunted zone. Harris has been a huge part of their run this year (this is her second 7SL selection) and was one of the weekend’s top performers.

Kari Tomarelli (Florida State): The Seminole Ladies have a pretty lengthy list of top contributors, which can make it hard to identify them, but Kari can be hard to miss. She’s the highlight reel factor on this Seminole Ladies team, always good for a massive layout each game. Her cutting continues to grow and this was a breakout tournament to cap off a breakout year. Next season, expect her to be one of the region’s top players. 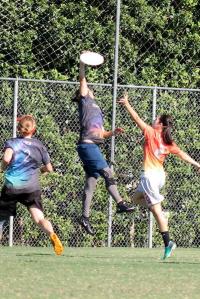 Emily Dayton (Vanderbilt): Dayton was a force this weekend for VUDU. Even with teams knowing full well she was the top threat, she was able to get off a lot of great hucks this weekend, able to get necessary resets, and get some big play Ds. With a nine woman roster, there were few breaks for Dayton, who also often tasked with matching up with one of the best players on the line. Gotta recognize a big final weekend for this senior.

Abbey Hewitt (Emory): After the weekend she had, I’d insert her in the conversation with Hammond and Lloyd. Hewitt missed most of the season due to school and foot surgery early this Spring, but once she found stride with her teammates, she became dominant. An aggressive cutter with elite agility and sticky hands, she came up with big play after big play for Luna. Defensively, she racked up Ds in the lanes, but is most at home sending dumps scurrying downfield for fear of getting the disc stalled out.

Morgan Hartmann (Florida): The diminutive Hartmann, a.k.a. MoMo, had a pretty big weekend for Fuel. Particularly Saturday, before the mud neutralized some of her quicks, MoMo was making her mark, scooting around unders and outs, getting dirty with some nice layouts, and consistently getting open when the offense got a little tied up. Fane and Dahl are the stars, but without Hartmann, Florida doesn’t put up the showing they did.

Hannah Leathers (Georgia): I struggled picking this last one, as I kept thinking it should be Georgia’s Margie Quinn here, but Leathers’s defensive play made the difference for me. While she had a lot of pretty hucks this weekend, Hannah had a number of great defensive plays, coming up big for Dawgma in some of those tight games. The other thing she did extremely well was being deadly efficient in the red zone. Few college players have the ability to see the right shot down near the goal line, but Leathers has a knack for knowing when it is time to strike. 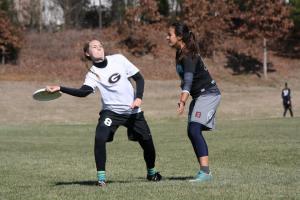 Margie Quinn (Georgia) is where I obviously have to start, Dawgma’s primary handler. Slowing down her hucks and break throws is a real challenge, because she has a difficult release point and delivers it quickly and with precision. She’s also an important vocal leader for the Southeast Champs.

Kristin Lloyd (Florida State) lives up to the hype. With the dearth of talent exiting this year, Lloyd may very well be the best player in the region next season.

Zina Stavitsky (Emory) is the future of that team. Developing into a very pure handler, she was a dangerous threat on Luna’s 12 lady roster.

Julia Fuster (Georgia) is always a great defender and continues to emerge as an offensive playmaker as well. Some big layout grabs from her this weekend.

Jessica Chau (Georgia Tech) was playing very well for Wreck when I saw them. Putting her downfield, she was able to use her quickness to get a lot of yardage gaining unders and make some very very impressive grabs.

Mariel Hammond (Central Florida) may feel like an obvious pick, but if you watch her play, she’s hard to miss. It could be because she’s constantly open, especially when the Sirens are in the red zone.

Jenna Dahl (Florida) is another usual suspect, but her ability on both sides of the disc is what makes her hard to omit. Big puts, consistent resets, but their zone D basically functions on forcing the defense to throw the disc in her general vicinity so she can layout D it.