The Southwest region, as far as I can tell, seems to be one of the more controversial regions in the women’s college game. The question comes down to: how strong are they really? With the two premier West Coast tournaments happening in their backyard – Stanford Invite and Santa Barbara Invite – they play each other a lot. It becomes tough to ascertain their national strength. They have two of most successful programs in women’s history, with Stanford Superly and UC-Santa Barbara Burning Skirts, but this year’s tournament will yield only two College Championships bids. Last year, the reigning National champ, Santa Barbara, failed to qualify, while Stanford nearly missed the cut themselves. With two bids, and lots of questions we won’t get answered until we see them in Madison, there should be plenty of drama on tap in Goleta, CA this coming weekend.

What I believe to be seedings, and the pools:

Pool winners going into the a Championship game, while the 2nd/3rd finishers in each pool going into a backdoor bracket. Everyone else is eliminated from contention for a bid. Harsh format.

The UC-Santa Barbara Burning Skirts are back. “The whole team is really excited. We’ve been working hard since Sectionals to try to improve on different aspects of the game to come out strong during Regionals,” said Captain Katie Hawn, “We’re going to go in and play our game with the goal to be in Madison in a few weeks.” Expectations are high once more, and with good reason. The Skirts already have shown they have the potential, beating Washington, Texas, Colorado, North Carolina, and Wisconsin. In the region, they’re 14-2, with their losses coming at the SB Invite (Rain edition) by a point to Southern California and a one point loss to Cal at Stanford Invite. However, UCSB played a lot of close games at their Conference Championships. The specter of last year’s humbling performance also may prove a tougher opponent to beat. Hawn paints a prettier picture, however, “It’s definitely been a motivating factor. We’ve used the past year to strengthen our bond as a team and maintain focused practices.” This year’s version of the Skirts may lack Marie Madaras and Stephanie Karba, but they added Lisa Pitcaithley and return Hawn and Alicia Thompson. Pitcaithley and Thompson are highly capable behind the disc or downfield, making them difficult to gameplan for. Hawn, Kaila Pollart, and Noelle Neason have all stepped into bigger roles for Santa Barbara and could help lead them back to the top of the region. 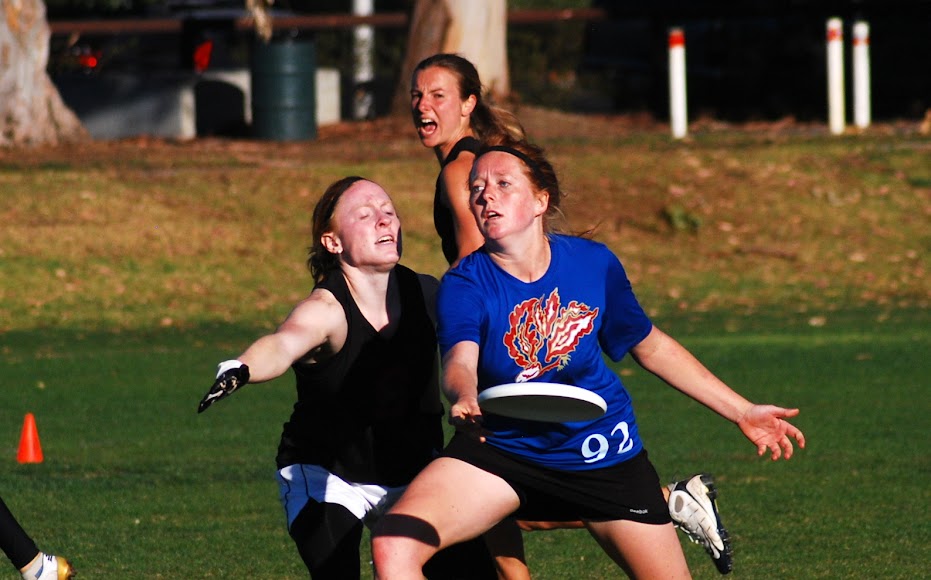 The California Pie Queens are coming off an uneven year that still shows they’re not to be taken lightly. Their victims this season include UNC-Wilmington and Texas, and while they haven’t played Stanford, they have beaten both UCSB and Sonoma. However, they have several close games against strong teams, like Colorado, Washington, and Virginia. Between those and their close losses, this team is only a few adjustments away from making a big splash. They lost as much as anybody in the region when Claire Desmond and Abby VanMuijen graduated, but do retain a very strong handler group, anchored by Lily Lin. These don’t quite look like the Berkley ladies that won the region last year, but with Lin, fellow handler Maya Gilliss-Chapman, and new coach Manisha Daryani of Fury, they have shown they can beat top teams.

UCLA Bruin Ladies Ultimate (BLU) has, not unlike Cal, shown they can beat top teams, but have also struggled in some winnable games. Victories over North Carolina and Florida State highlight their regular season, while two losses to Dartmouth and four at the hands of UC-San Diego reflect poorly. In fact, BLU is 2-4 against UCSD, 0-3 against Sonoma State, and have dropped games against SDSU, UCSB, and Arizona State. The losses of Sabrina “Kodiak” Fong and Kelly “Sapphire” Wiese have obviously sent this team into a transition. That is eased by their regional Coach of the Year, Caitlin Rugg, and returning FOTY, Megan Beck. They’ll need to put together a more consistent performance at Regionals if they want to be a factor.

The San Diego State Gnomes have done solidly against in region competition. They scored wins versus UC-Davis (x2), Cal, UCLA, UC-San Diego, Arizona, and USC. The Gnomes lost some very close games in region as well, two of those against UC-San Diego, once to UCLA, and once to UC-Santa Barbara. One of those UCSD losses and the UCSB loss came at Conferences, which is a good sign. They could definitely turn in some surprises at this tournament.

Arizona State Caliente may demonstrate the drop off in this pool. Their early season results weren’t bad, where they beat UCLA and played Sonoma, Davis, and Dartmouth tight. Perhaps most importantly, they beat Arizona twice at Conferences. Other than that, there isn’t much notable about their results this season. If they can harken back to their early season play, and add on their development since then, they may be able to push the teams above them.

Cal Poly-SLO may have a tough time at this tournament, with the quality of team they will see game in and game out. They’ve struggled against teams from tiers above them. The challenge of deep tournament fields like this one is that you get no games off, but the flip side is that your opponents may spend all day fighting in close games and you can catch someone off guard.

Stanford Superfly is also looking to rebound, but their regular season hasn’t exactly gone according to plan. At Stanford Invite and Centex, they went 4-10. Sure, they got good wins over Wisconsin, North Carolina, and Minnesota, but more importantly, they did enough to get the Southwest a strength bid (can you imagine going from five bids to one in a year!?) Yes, they have beaten UC-San Diego and Cal this season. However, they have also lost to Sonoma once and the Burning Skirts twice. Fortunately, they put it together at their Conference tournament, blowing out Sonoma 14-6 in the Final. Superfly has struggled with injuries and issues getting their full roster together, including at that Conference Championships tournament. Jamie Nuwer and Robin Davis will have to balance chemistry issues that come with roster inconsistency, but they could also show teams some things they haven’t seen before. One thing opponents know to expect is junior Michela Meister to go ham. The U23 selection and 2012 All-Region player is a total package stud. Hillary Vance and a variety of tall receivers aid Meister in the effort for a Southwest takeover.

Sonoma State D’Vine has been a consistent team most of the season. They’ve beaten most of the teams below them and haven’t caught up to the teams above them. Their win against Stanford came early in the year at the SB Rain Invite, and while they’ve beaten Cal, UCLA, and UC-San Diego, they’ve fallen short of beating Oregon, UC-Santa Barbara, and Washington. Most recently, they turned in a weak showing against Stanford in their Conference Final. Sonoma is a team that has an interesting juxtaposition of returning a large chunk of last year’s cinderella squad, but having lost superstar Maggie Ruden. They do still have 2012 2nd Team All-Region hucker Hannah Stueckle, and a stable of athletes like Candice Pacheco, so their talent level will allow them to capitalize on mistakes from even the top seeds.

UC-San Diego Psycho has been plagued by inconsistency, in contrast to D’Vine. The bright side includes wins over Northwestern, Florida, beating Colorado St. 13-0, and beating North Carolina 13-6. However, they are also 0-2 vs. Sonoma, dropped games to SDSU and Cal, struggled against most of the the elite competition they saw at Stanford and Centex. The Psychos rebounded at Conferences, losing only to UC-SB, but their win over San Diego State was 12-11. If Captains “Chip” Chang and “Fiddy” Wong can build from their success there, it certainly could be a platform to make a run like Sonoma or Cal did last year.

The Southern California Hellions hold an early season win over the Burning Skirts (and one OR win against Western Washington), but otherwise have not had much success against the region’s stronger teams. Those are the types of teams they’ll need to beat if they want to break seed this weekend. Conferences wasn’t their best showing, so they’ll need to put that in the rear view and regroup. Kate Schlag, Kristine Brown, and Amy Lee (aliases: Stamp, Pando, and Hoover, respectively) lead the way for the Hellions.

UC-Davis Pleiades will have to really kick their game up a notch to repeat last year’s success. They do seem to be playing better during this part of the season, with all of their losses at Conferences being fairly close games. Prior to that, they struggled, though they notched wins over Arizona and Arizona State, who they may need to beat in order to hold seed.

Arizona Scorch has an uphill battle at Southwest Regionals. They have really struggled against the Regionals field, though they gave USC a tight game earlier this season. Still, improving on last year’s 0-5 showing at this tournament would be a sign of progress.

I’m thinking Cal, SDSU, and UCLA each end up 4-2, but UCLA is left out on point differential. Tough break.

I think this region gets challenging in the backdoor, but I think Santa Barbara cemented themselves as the favorite in my mind. They just have too many weapons and Pitcaithley and Thompson are so hard to match up against. I do like both Sonoma and Cal, but my gut tells me Cal slips on Saturday. Having to go through that bracket is brutal and will keep either Cal or Sonoma (so hard to pick in that Semi) from making a hard move in the backdoor game. Stanford is too experienced to let the backdoor blues cost them that one. Should be interesting, to say the least.